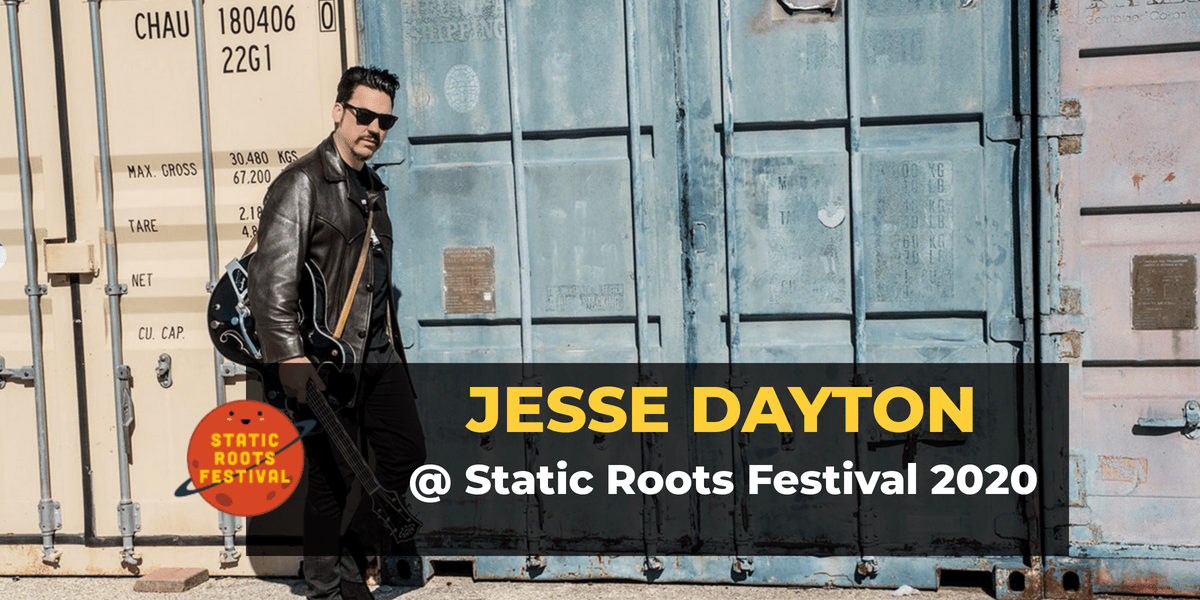 With his mix of outlaw country and blues, rock'n'roll and some punkrock, we think Jesse Dayton from Beaumont, TX, USA, is a great addition to the line up of the Static Roots Festival 2020. 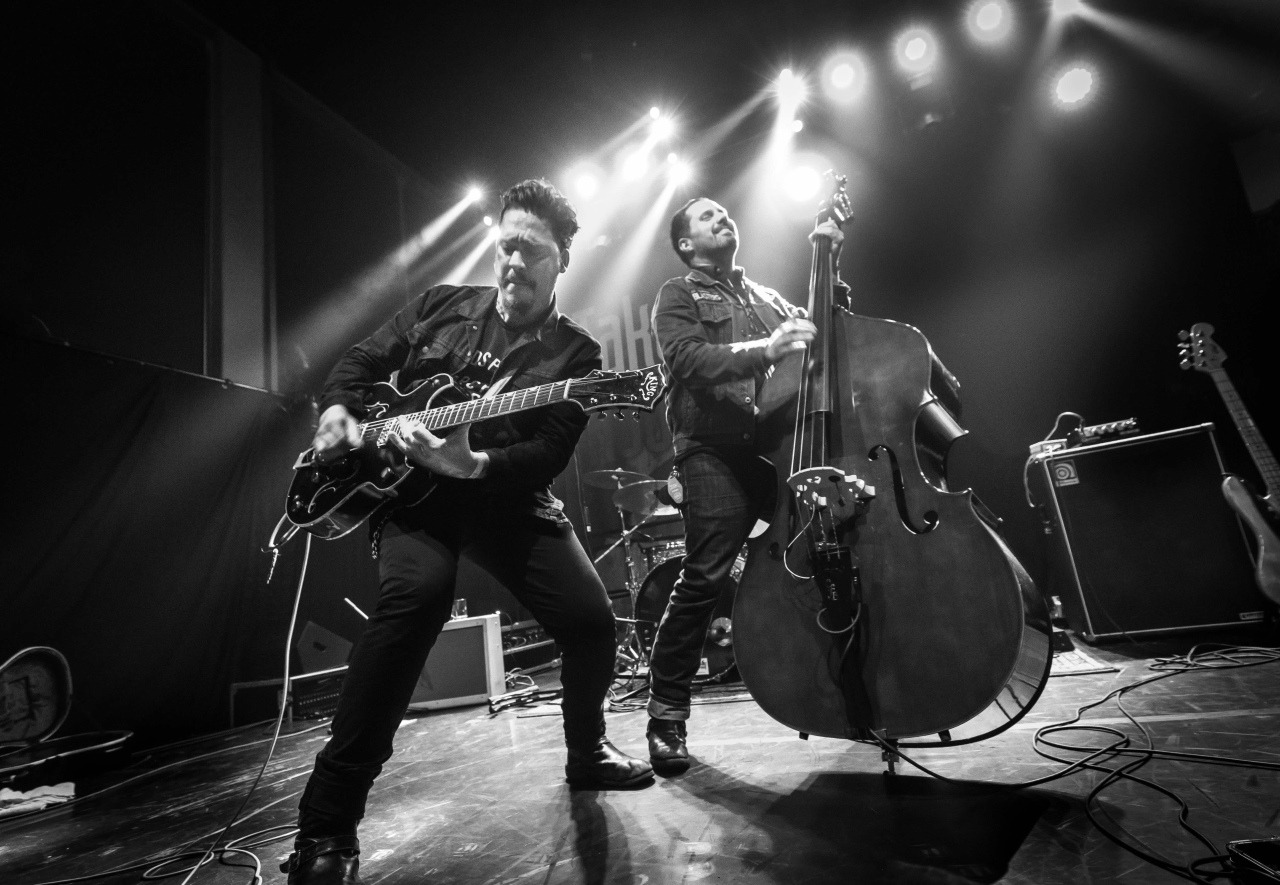 “If you open your arms to the world, it’s amazing what will come back atcha,” drawls East Texas native, singer/songwriter/filmmaker/author Jesse Dayton, who has a bunch more homespun wisdoms where that came from. A veteran of more than 30 years as a musician, Dayton was discovered as a young teenager playing “a toilet dive” in his hometown of Beaumont by legendary club owner Clifford Antone, who booked him into his famed Austin venue, then immediately shifted him over to the honky-tonk Broken Spoke, where the likes of Willie Nelson, George Strait and Ernest Tubb have had residencies.

“When I first got to Austin, everybody else sounded like Stevie Ray Vaughan, but I sounded more like Jerry Reed. I didn’t think I was cool, either, because this was before every punk sported that image of Johnny Cash flipping the rod.” Equally steeped in Texas/Louisiana blues, old-school country and punk-rock, Dayton is the music world’s best-kept secret, hiding in plain sight as a guitarist for Waylon Jennings, Johnny Cash, Ryan Bingham and L.A. punk pioneers X, as well as touring alongside Social Distortion, the Supersuckers and John Doe.

After releasing 11 studio albums and an EP as a solo artist, Dayton’s new album, Mixtape Volume 1, is a series of 10 cover songs he thoroughly makes his own, reinterpreting and revisiting them in a brand-new way. On the first track and single, Jackson Browne’s “Redneck Friend”, Dayton takes the song to a place where it would be equally at home on the first two Eagles albums or as a Rolling Stones collaboration with Gram Parsons. He transforms Neil Young’s “Harvest” into a country plaint complete with pedal steel guitar and hurdy-gurdy piano, while offering a majestic take on Gordon Lightfoot’s “If You Could Read My Mind”. Brought up on his older sister’s Laurel Canyon folk records, the FM album rock and punk he listened to as a teenager plus the array of country acts who used to tour through Beaumont – including Johnny Cash, Johnny Paycheck, David Allen Coe, Conway Twitty, Hank Jr., and George Jones – Dayton has managed to create a genuine hybrid that takes alt-country and Americana in new, exciting directions.

“The world doesn’t need another outlaw country singer covering Waylon Jennings,” he says of his stylistic mix. “Everyone where I was growing up had no idea Neil Young wrote Waylon’s ‘Are You Ready for the Country?’ or that George Jones’ ‘Bartender’s Blues’ was written by James Taylor, a stoned junkie at the time.”

Turned on to the music’s possibilities by attending an early Clash/Joe Ely tour, Dayton transforms the U.K. punk icons’ “Bankrobber” into a kind of Bo Diddley shuffle, just as The Clash similarly turned Bobby Fuller Four’s “I Fought the Law” into a three-chord rave-up. He relocates the roots of ZZ Top’s “She’s a Heartbreaker” on the Texas/Louisiana border with some sawing Cajun fiddles, while AC/DC’s “Whole Lotta Rosie” gets the harp-honking Jimmy Reed treatment. The Cars’ new wave ditty, “Just What I Needed”, is reimagined as a George Jones honky-tonk lament, while Bruce Springsteen’s “State Trooper” combines Johnny Cash gravitas, Jim Morrison’s dark bravado and the Boss’ own New York punk duo fave Suicide’s doom-laden theatricality into a compelling whole.

Although he tours nearly 250 days a year, Dayton keeps the home fires burning in the same Austin house he bought thanks to earning 75% of the publishing royalties from writing songs for the soundtracks of three Rob Zombie horror flicks, including The Devils Rejects and Halloween 2 (performing a cameo as Captain Clegg, a roll he revived nightly as the support act on Zombie’s U.S. tour that year).

Dayton has more than 50 songs licensed to film and television, writing and directing what he calls a B-movie Roger Corman monster flick, Zombex, in New Orleans, featuring an eclectic cast including Malcolm McDowell, cult actor Sid Haig, Walking Dead’s Lew Temple, Corey Feldman, Slayer’s Tom Araya and X’s John Doe, who promptly asked him to sit in for Billy Zoom, recovering from cancer treatment, on a 40-city tour. His next project is writing his memoirs and short stories for a book to be published next year, and he just finished playing guitar on Guns N’ Roses bassist Duff McKagan’s new solo album.

“You have to be honest with yourself about who you are,” he says, explaining his longevity as a performer. “In terms of surviving, you have to pay attention to the macro as well as the micro.” Active politically – he’s played several benefits for fellow Texan presidential candidate Beto O’Rourke (once a punk-rock guitarist himself) – Dayton had an intense one-on-one with President Bill Clinton after playing his inaugural ball with Lucinda Williams.

“I’m scared to death about what’s happening now, so I remain vigilant,” he says. Jesse Dayton has come a long way from the backwaters of his Beaumont hometown, encouraged by his parents to escape the stranglehold the oil industry-dominated region has on the town’s inhabitants.

“They always pushed me to be an artist,” he says. “You don’t want to be anybody’s slave.” On Mixtape Volume 1, Jesse Dayton pays tribute to his past, but never keeps his eye off what’s next.

"He’s played with Waylon, Cash, and Duff McKagan, but the Texas motormouth is at his best when he’s singing his own tune"
Rolling Stone 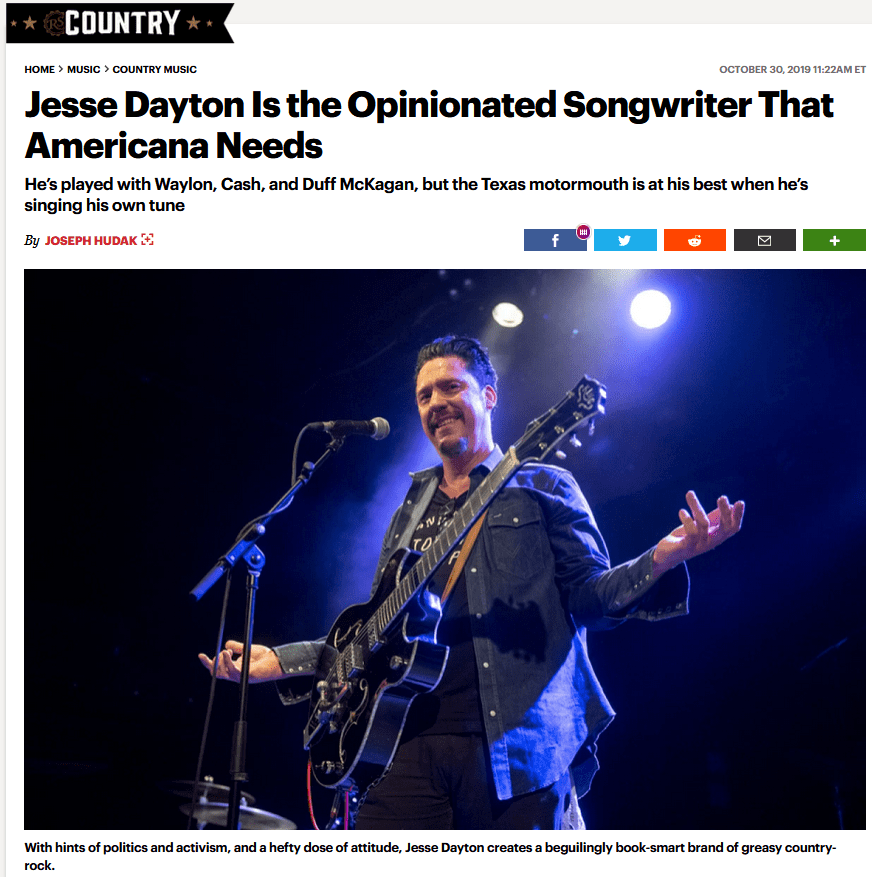