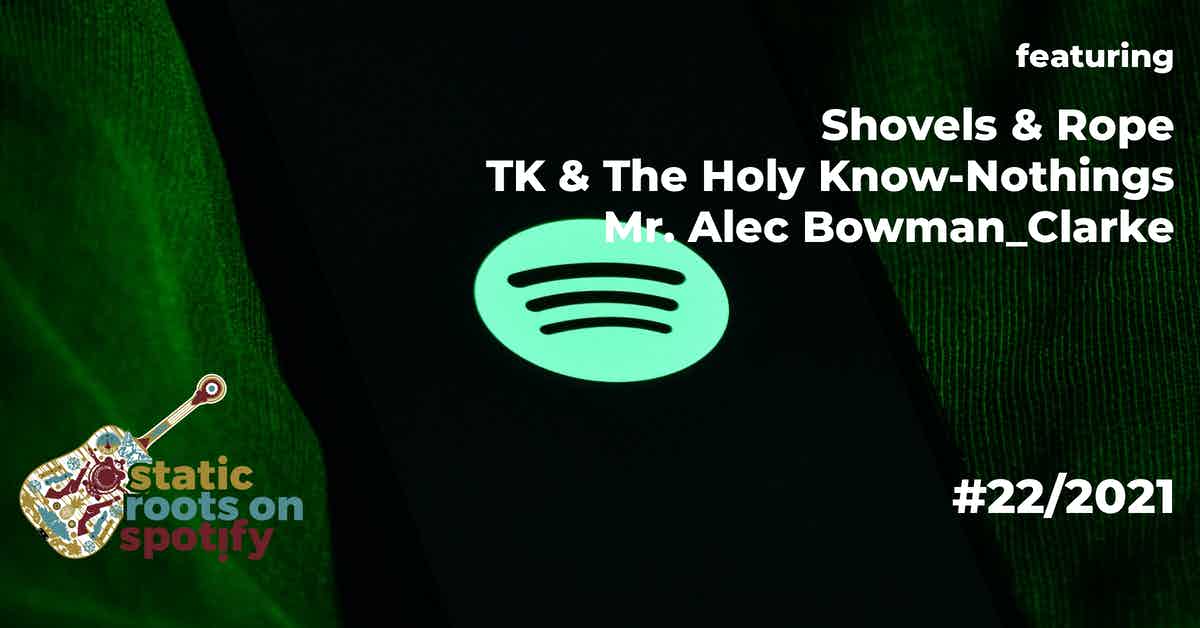 In 2021 Dualtone Records celebrated their 20th anniversary and at this occasion released a compilation album called "Amerikinda". The concept behind the album is just beautiful: Dualtone artists show their love of other Dualtone artists by covering their songs. Brilliant idea, beautifully implemented. And the front cover of the album is amazing, too.

Shakey Graves' "Dearly Departed" is usually a foot stomper of a song but Shovels & Rope turn in into a very touching, soulful and inspiring ballad putting their own spin on the song. Check this out - we're in love!

TK & The Holy Know-Nothings - I Don't Need Anybody

What a great band name! For a couple of years now, we are following Taylor Kingman and his creative output. With the album "The Incredible Heat Machine" Taylor Kingman and his Holy Know-Nothings released a contender for an "album of the year" award. Taylor calls his music "psychedelic doom boogie" while we'd love to put a "Cosmic Country" label on it.

"I Don't Need Anybody" is a soulful, crushing ballad with some utterly honest lyrics.

Just a couple of weeks ago, Mr. Alec Bowman_Clarke contributed a sublime video to our "stay safe sessions" project. In the meantime, Alec released a superb EP called "A Place Like Home".

"Dearly Departed" comes along with a warm guitar tone, a fantastic sound, and the most beautiful harmonies sung by Josienne Clarke. Alec about "Deleted Scenes":

"‘Deleted Scenes’, the first single from my new EP, ‘A Place Like Home’, was the first song I wrote after my last album, ‘I Used To Be Sad & Then I Forgot’.

‘Deleted Scenes’ is about the search for meaning & a place in this lying, decaying late-stage capitalist nightmare of a reality we are fortunate enough to inhabit.

‘Deleted Scenes’ is a big country banger with a singalong chorus & inspiring, uplifting verses, because I love music like that. I just wanted to do what Ruston Kelly does, and I can’t because I don’t sound like him, but I can try, eh? I kid myself that the cloyingly knowing self-referentiality of the lyrics is doing a Father John Misty, a trope I’ve further milked dry by wearing a beard on the cover of the record. Every time I find myself doing things like that, I throw them away, cut them off, right away but I’m susceptible and I hate myself for it! What else can you do?

The video is made of snippets of me being a twat that I got mainly from Josienne’s iPhone. I dunno if it’s endearing or just ridiculous. It made me laugh. I was trying to make a video which didn’t make me look cool or interesting but instead showed the bits between takes where I wasn’t trying, or the failed attempts to look cool where I’m trying too hard. Since that’s sort of what the lyric is about, I thought it might suit the video. I had a play with terrible early PowerPoint style flying words to show the lyrics, which are important to me.

The overall message seems to be a humanist one – a belief in science, with an acceptance that not everything is known. Another tired trope but one that seems to me to be true, regardless of how tired it might be."