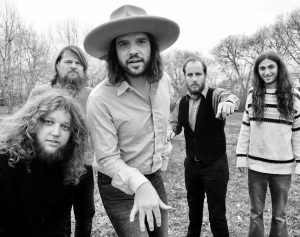 We have been working on this one for almost six months now and we are extremely happy to announce the last act for the line-up of the Static Roots Festival 2018: the amazing Cordovas from Nashville, TN, USA, will play the headlining show on Saturday, Jul 14th!

It was actually a coincidence that I got to see the Cordovas at the 20th anniversary Take Root Festival 2017 in Groningen, Netherlands. I had just seen an amazing show by Hurray For The Riff Raff and was on my way to another stage room to see The Cactus Blossoms when in the venue’s foyer five guys, long-haired with lots of guitars entered the stage in the foyer of the venue. Starting off with brilliant four-part harmonies, a great sound, solid grooves and a front man, Joe Firstman, with a great stage presence. After the third song I found myself completely excited, arms up in the air, yelling for more and finally stayed until the end of their show. Still rooting for more. Like the other about 1.000 people enjoying their brilliant performance.

From that moment on it was absolutely clear: these guys have to play the Static Roots Festival 2018!

This is what the Rolling Stone says about the Cordovas:

Sounds Like: The harmony-heavy, guitar-fueled house band at a Big Pink keg party in 1968

Why You Should Pay Attention: Already cult favorites in Nashville, Cordovas have built honorary home bases across the globe, thanks to recurring shows in Todos Santos, Mexico – where ringleader Joe Firstman runs the yearly Tropic of Cancer Concert Series – and a touring schedule that recently including headlining gigs in Sweden and a stateside run alongside the Turnpike Troubadours. The band’s sound, though, is decidedly American. Caught halfway between Duane Allman’s Telecaster twang, the Dead’s hazy harmonies and the stoned swoon of California’s folk-rock heyday, Cordovas wring new life from older influences, hoisting their freak flag high on their upcoming album, That Santa Fe Channel.

They Say: “We did everything live,” Firstman says of That Santa Fe Channel, which was produced by the Milk Carton Kids’ Kenneth Pattengale. “Even the harmonies were recorded together, with all three of us singing. We probably did 15 takes of the first song, ‘This Town’s a Drag.’ Kenneth wanted it to sound as real and authentic as possible, and when I listen back, it gets better and better every time.”