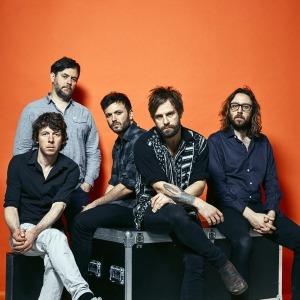 “They could well be the illegitimate love children of Springsteen, Mellencamp, Frei and Henley”. Their debut album, “All On Red”, has just been nominated for an “Album Of The Year” award at the Americana-UK. This is sure going to be one of the bands you do not want to stop playing.

at the Static Roots Festival 2019!

After the indefinite hiatus in 2013 of UK alt country outfit Ahab, song writer Steven Llewellyn went on to form his own band with the help of Ahab originator Dave Burn.

Being firmly a part of the London country scene made it easy to get involved in collaborations with members of bands like Danny & The Champions of The World, whose drummer Steve Brookes, already having toured heavily with Ahab, became a permanent member of Orphan Colours in 2014.

A contact of Brookes later lead to a meeting between Llewellyn and Noah & The Whale guitarist Fred Abbott. The lead guitarist was in the midst of auditioning lead singers for his solo project and the two found common ground in their appreciation of Tom Petty and Jason Isbell. When Abbott heard Llewellyn’s demo’s for the new Orphan Colours project he immediately signed up.

Graham Knight was quickly drafted in on bass and vocals, having already played shows with ahab throughout 2012, he was an obvious fit.

The band have some impressive credentials with Llewellyn and Burn having already honed their songwriting craft during their tenure with Ahab, who swiftly built a reputation as an unmissable live act after their performance at the Cropredy Festival 2010. That performance paved the way for a collaboration with legendary producer John Leckie and being championed by BBC 2 DJ ‘Whispering’ Bob Harris. The band went on to play many successful tours in UK, Denmark, Germany and Australia as well as notable festivals; Bestival, Green Man, Wilderness and Board Masters amongst others.

The band have just released their fantastic debut album ‘All on Red’ – on popular independent label At The Helm Records. With an already established fanbase, huge critical acclaim and solid underground credibility so firmly ensconced in their DNA, Orphan Colours have rapidly established themselves as the hottest band to emerge from the London Country/Roots circuit.

“They could well be the illegitimate love children of Springsteen, Mellencamp, Frey and Henley.” – Robs Raw Music

“as stunning a debut album as you’re likely to hear this year, or any year for that matter.” – Fatea Mag

“Orphan Colours have delivered a joyful sound that manages to mix some of the best elementsof rock’n’roll, blues and Americana into a harmonious and infectious record.” – Folk & Tumble

“Get on board early before this group becomes Jools Holland’s latest discovery and they go all ‘arena’ out of reach !” – Maverick Mag

“I am confident in stating it will be in my top albums of 2018. …..it is just damn good music bydamn good musicians.” – Robs Raw Music

“Breezy, carefree and unpretentious, something unique – great songwriting performed for sheer love, without an agenda in sight” – Clash Magazine

“With commercial success, critical acclaim and underground credibility already under their belt, the band’s track record speaks for itself” – Exposed Magazine