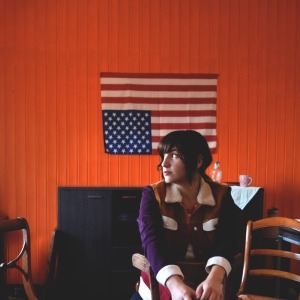 We are thrilled to welcome this brilliant act from Barcelona, Catalonia, Spain, to the Static Roots Festival 2019:

For her fourth album in five years, Joana Serrat travelled from her home in Vic, Barcelona to the Texas Hill Country outside Austin. There she teamed up with Israel Nash at his Plum Creek Sound studio near the town of Dripping Springs. For the recording sessions Nash & Serrat corralled a stellar crew of musicians: Joey & Aaron McClellan, (Midlake, BNQT, John Grant, Israel Nash), Eric Swanson & Josh Fleischmann (Israel Nash), Dave Simonett (Trampled By Turtles) and Dennis Love (Futurebirds), as well as Nash himself providing additional guitar and backing vocals. Israel Nash produced the album, with Ted Young (Grammy award winner for The Rolling Stones) on engineering and mixing duties.

It was no mean feat to gather all these creative talents and get them working together as a team, but as Israel Nash commented, “it was very easy to work with Joana because she knows where she wants to go and she leads us all there. Joana’s lyrics are brilliant. She uses images and colours to describe her songs and luckily that’s the way we are used to working.” Joey McClellan adds, “her voice was our guide”.

What she came away with is, however, nothing short of magnificent and should see Serrat building on her existing achievements which have included a BBC 6 Music Recommends Track Of The Week, selected by Gideon Coe and Lauren Laverne, the latter commenting “she’s an amazing artist, an astonishing talent and I love her songwriting”. Within the last year, Joana has toured with The Jayhawks and The Handsome Family & Courtney Marie Andrews, played the main stage at Primavera Sound Festival, showcased at SXSW and has been invited to Nashville in September to showcase at AmericanaFest 2017.

Spanish music magazine Mondo Sonoro, keen to review the new record, has already awarded it 9/10, telling readers, “It’s hard to explain why you like a record, sometimes it’s just a matter of skin: if it gives you goosebumps, that’s it. In other words a record gets to you when it touches something inside, like a kind of spring that triggers a chain of emotions. An artist either has this or not, but it’s something that can never be forced… But all that would mean nothing if Joana Serrat wasn’t rolling in talent and sensitivity in this album, if she didn’t have “that thing” capable of shaking your spirit.”

Dripping Springs was released digitally, on CD and on 180g vinyl on the 29th September 2017 via Loose Music, London.

“It’s hard to explain why you like a record, sometimes it’s just a matter of skin: if it gives you goosebumps, that’s it. In other words a record gets to you when it touches something inside, like a kind of spring that triggers a chain of emotions. An artist either has this or not, but it’s something that can never be forced… But all that would mean nothing if Joana Serrat wasn’t rolling in talent and sensitivity in this album, if she didn’t have “that thing” capable of shaking your spirit.” 9/10
#1 BEST NATIONAL AMERICANA RECORD 2017
MONDO SONORO

“I swooned on first listen and I’m swooning still… She sounds like an alliance of Mazzy Star and Slowdive – now imagine that, and it gets better.” 8/10
AMERICANA UK WRITERS’ BEST ALBUMS OF 2017

“a wide musical vista of contemporary Americana that meanders its way elegantly from start to finish without a misstep, highly recommend you check it out without delay.”
#4 BEAT SURRENDER BEST OF AMERICANA, FOLK & COUNTRY 2017

“Dripping Springs is an atmospheric wonder of dreamy delights… Listening to Joana Serrat is like a sunset in the desert coming to life – there’s bewitching natural beauty in every song.”
#28 HIGHWAY QUEENS TOP 30 FAVOURITE ALBUMS OF THE YEAR

“Variously likened to Mojave 3, Neil Young and Mazzy Star, what might be best described as Dream Americana, this is certain to expand her following and bolster her scrapbook of glowing reviews even further.”
FOLK RADIO

“Joana Serrat has done it again, an impeccable piece of work that consecrates, if it was not already, as one of the great references of Country-Folk in these lands, and one that can go up against those on the other side of the Atlantic. In love with Joana Serrat and her songs – it couldn’t be anything less for a talent like his.”
SPOONFUL MAGAZINE

“quieter moments, on tracks such as Farewell and Keep On Fallin’, are as gorgeous as the “eternal sunsets” she sings about.” 8/10
IRISH NEWS

“Big, broad and brooding, it’s like The War on Drugs penning a soundtrack to Fistful of Dollars with vocals from a Rivendell songstress.”
GIG SOUP

“…three different flavors of country stars-in-the-making. I’ll start with Joana Serrat whose excellent new record is a real head-turner. …the album features some cosmic Americana vibes, occasionally turning dreamy and full-on psychedelic with some excellent work from the backing band and some well-placed space-out pedal steel. Check it out!”
JAMBASE

“Spanish singer-songwriter Joana Serrat has channeled one of the coolest alt-country vibes.. songs like Western Cold Winds, Lost Battles and Trapped in the Fog encapsulates all the best dreamy twang that the likes of Neil Young and Mojave 3 are best known for.”
POWER OF POP

“Perhaps we’ve all been looking for this for years, the cross between the Cocteau Twins and Joan Baez, made with a distinct personality that extracts the melodious arrangements of 50’s & 60’s Pop with positive results.”
ROOTS HIGHWAY

“melodies that are ethereal and atmospheric …Serrat’s voice is an incredible thing. A stunning softness in places and a powerful vocal in others – she delivers poignant poetry that ties in with the quality of the melodies throughout this album.” 8/10
THINKING LYRICALLY

“bewitchingly beautiful and interwoven with a loving melancholy”
SOUNDS AND BOOKS

“a true jewel from beginning to end”
MUSICA CRONICA

“her full identity appears with more presence and personality than ever, placed with the same exquisiteness that intensity of her handling of the roots”
RUTA 66

“Serrat was captivating from the start. Playing an acoustic and accompanied by her brother on drums Serrat played a set of gentle dream-pop… Serrat’s songwriting is rooted in Americana but delivered through a hazy, reverb-soaked filter. At the centre sits Serrat’s voice; clear, purposeful and soothing… Serrat’s set is spellbinding”
SOUNDBLAB

#11 THE MOST OUTSTANDING RECORDS OF 2016
LA VANGUARDIA

“Her soft and genuine voice opens you up to a new world, a world of dreams and smooth and silken atmospheres”
ROLLING STONE FRANCE

“‘The voice of an angel’ is an expression often used by music reviewers but despite it not being on best form owing to tiredness from a hard day of travelling, few could argue that Joana Serrat’s isn’t just that.”
TOO MANY BLOGS

“There are many ways to get away from reality; “Cross The Verge” is one of them. All dawns in “Lonely Heart Reverb” – Joana Serrat puts us in a dream, asking us to walk across an ocean of desires and re-discover with her a place of shadows, deserts and endless echoes.”
#1 TOP NATIONAL ALBUMS 2016, BLISSTOPIC

“…the spectre of Joanna Newsom hangs heavy on her breathy vocal – evokes the sweeping alt-country of Lambchop. Gorgeous.”
NME

“She completely disarms with her hazy delicacy”
EL PERIÓDICO

“There can be absolutely no doubt that she is an amazingly talented artist and songwriter.”
SONIC BANDWAGON

“It’s an album that seduces on first listen and has enough depth and variety for repeat visits. Serrat, along with her collaborators, has made a beautiful record.” 8/10
AMERICANA UK

“Cross The Verge has a slightly intoxicating and sometimes almost mesmerizing effect and does occasionally remind you of albums by Mazzy Star.”
KRENTEN UIT DE POP

“Joana Serrat is undoubtedly a major new talent. Her songs on ‘Cross the Verge’ blend an exquisite ethereal folk with a very modern take on the dreamy shoegaze genre.”
SONIC BANDWAGON

“A beautiful album to prolong the fires of the summer, once the cold and the rain have returned”
ABUS DANGEREUX

“Her songs are thoughtful, delicate and achingly beautiful.”
LISTOMANIA

“A beautiful, moving and captivating set… Serrat’s ethereal voice filled the room and occupied a space between a Mazzy Star like breathiness and an earthy, deep lustiness that evoked Beach House’s Victoria Legrand.”
9/10
THE FOUNTAIN