The final addition to the line-up of the Static Roots Festival is here: David Corley and band from Lafayette, Indiana (USA)! 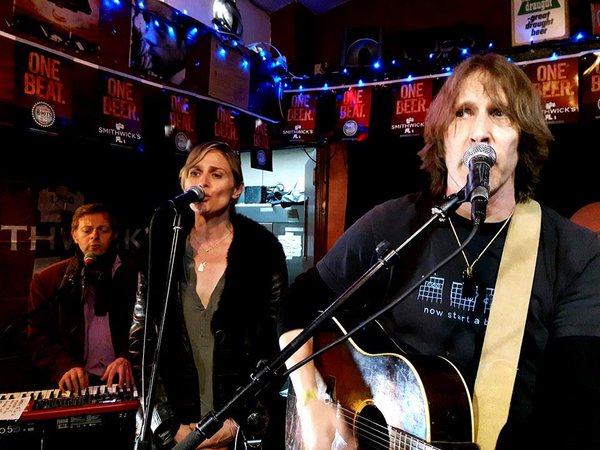 David Corley’s 2015 debut Available Light earned international critical accolades, and featured prominently on years’ best lists across Europe, Ireland and the U.K. He played some inspiring shows at Kilkenny Roots Festival 2016  and will now be coming over to Germany for the first time.

Corley’s debut album Available Light, beautifully arranged and produced by the multi-instrumentalist Hugh Christopher Brown on Wolfe Island, Canada, is receiving international raves and earning comparisons toTom Waits, Bob Dylan, Leonard Cohen and Lou Reed. Jonathan Sanders, NUVO put it this way: “After hearing David Corley’s debut album Available Light, one could say the Lafayette native arrived out of nowhere at age 53, akin to hitting a homer in his first at-bat. the album is a product of a 30-year cross-country odyssey of self-exploration, one of those rare moments where a lifetime of experience comes to bear in a single album you have to hear. It is that experience which shines through, particularly in his gritty, road-worn voice, which he uses to bring the movie of his life into vivid technicolor.” Allan Jones, Uncut Magazine rated the album 9 out of 10 stars and exclaimed Corley is “a striking new voice…raise a glass to Available Light”!

“a stone cold cracker, an instant classic…Married to the cool crisp funk of the title song or the hazy shimmering guitars of the seven and a half minute closer the words flow as easily as the music creating an atmosphere that is nothing less than magical. Definitely an early contender for an album of the year.”

“This is big boy music, serious and striking from the excellent album Available Light. It’s an unhurried gem of a record, slow and meaningful, plaintiff, beautifully performed. Real music, not manufactured or pulled off a production line shelf.”
Mike Ritchie – Radio Host

“This is a terrific collection of bluesy rock tunes that showcase the Indiana native’s estimable skills as a songwriter and his pleasingly raspy singing voice.”
Jeffrey Sisk Pittsburg In Tune

“If there’s an album that’s a bigger surprise this year than David Corley’s “Available Light,” I haven’t heard it. At the ripe old age of 53, Corley has released a debut disc of ragged, atmospheric blues-rock that he most likely didn’t have in him when he was a younger man. We reap the benefits of Corley’s experience, and of the desperation apparent in his worn-through vocals….But there’s an underlying sense of hopeful resignation that comes through his weary croak and easygoing Americana piano and guitar, not to mention lyrics that have at times an almost Leonard Cohen-esque zen to them.”
Peter Chianca Wicked Local

“Available Light” – David Corley. If Alexi Murdoch, Tom Waits, and Joseph Arthur all got together and jammed, it might sound something like this gruff yet accessible, vaguely alt-country track.”
Stephen Carradini, Independent Clauses

“David Corley has a rough baritone voice, one that makes you think of heartbreak, cigarettes and the low purr of a mountain lion.”
Wei-Huan Chen, Journal Courier

“David Corley waited for just the right moment to unleash his talents to the world. The new ten-song album begins with the bluesy-folk/rock of the title song “Available Light” as Corley’s voice is warm and humble. His vocal delivery has a rough Warren Zevon quality …and he [will] keep you captivated with his music and lyrics.”
JP’s Music Blog

“Hearing Lafayette, Indiana David Corley’s debut album Available Light surprised my ears with this great indie-blues rock singer-songwriter who plays guitar, piano and bass on this album. Corley is a well-seasoned lyricist inspired by vivid dreams and classic literature of Joyce, Whitman, Blake and Rilke…His vocals remind me of Nick Cave and Lou Reed. Like a mood ring, each of these songs turns the stone a deeper color….We all need to lean into David Corley’s Available Light.”
Trish Lewis, The Review

“David Corley has a voice that resembles the dark vocals of Tony Joe White…Whether it be the rippling Available Light or Easy Mistake, Unspoken Thing or Lean (with beautiful piano playing): David keeps it modest and beautiful.”
Patrick Struijker Boudier