Big thanks to the folks at KREATIVKRAFTPREIS for nominating “Raumfahrtzentrum Saarner Kuppe” and the “Static Roots Festival” in the category “K2 – impressive events and performances”. 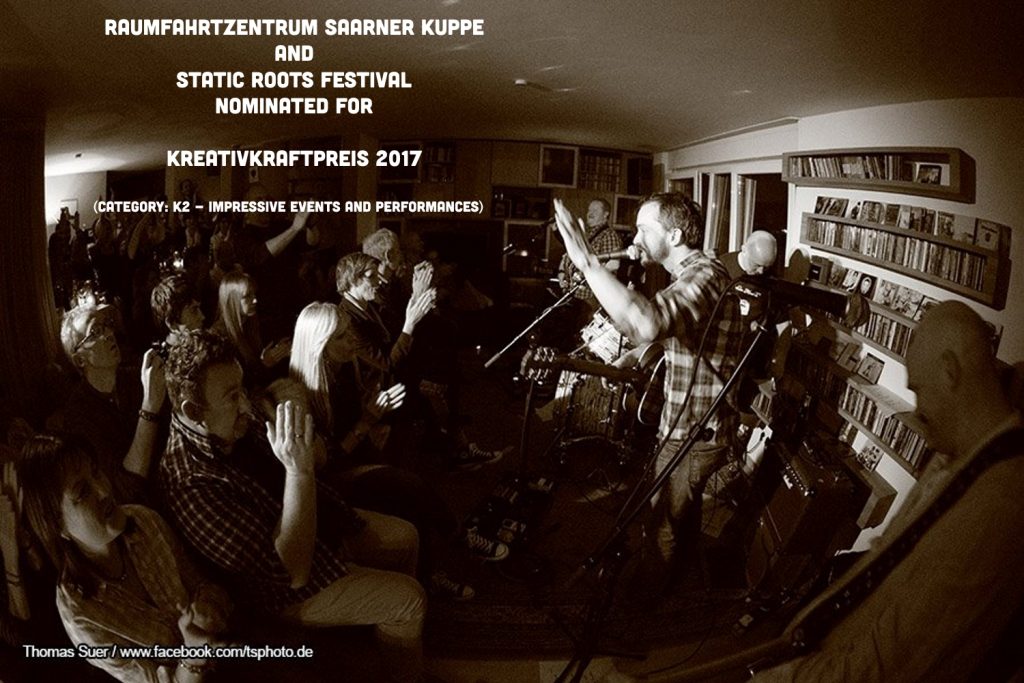 Let’s have a look at the history:

The “Static Roots Festival” goes back to an Americana/Alt-Country/Folk/Indie house concert series under the name “Raumfahrtzentrum Saarner Kuppe” started in November 2007.

Back in the early 80s the first listen to The Dream Syndicate’s album “The Days Of Wine And Roses” was a complete revelation and I instantly knew: this was music made just for me! After more than 30 years I still think the album is one of the best albums ever produced and I’m constantly returning to it a couple of times a year. For my 40th birthday back in June 2006 I invited Steve Wynn, the head of The Dream Syndicate, to come and play at my party at the Palette (Mülheim an der Ruhr, Germany). Which he did and with his band “The Miracle 3” they played a phenomenal show and lots of The Dream Syndicate songs. At the party Steve told me, he thought that I’d be the guy to do “house concerts” and he explained the great concept to me. Never thought that this could work out in Germany but the idea was growing in my head.

About a year later in July 2007, it was a sunny Sunday morning, I went down to the village (“Dorf Saarn”) to buy some bread rolls for breakfast. On my iPod I was listening to Leeroy Stagger’s album “Depression River” (which is another one of my all time favourites). Half way down the hill the song “Carol” came up and I was completely blown away: the story, the sadness, the great chorus, killer guitar, Leeroy’s voice … Couldn’t stop listening to that song until I was back home. So I instantly played the song to my wife and told her: “If we ever gonna do a house concert, this guy has to be it!”

Looked up Leeroy Stagger on MySpace and the web and found out he planned to tour in the UK in November 2007. So I sent him a message: “If you’re coming all the way from Canada to the UK, it’s just a simple hop from UK to Germany. Please come and play our house!”. A couple days later, Leeroy replied: “Get me five shows in Germany and I’ll be there!”. Which I did. And all of a sudden on a cold November night Leeroy played his first German show in Mülheim! It was a brilliant night, full of emotions, stories and fun. This had to be repeated. “Raumfahrtzentrum Saarner Kuppe” was born.

9 years down the road, about 50 house concerts and many more new friends later, we decided to set up a festival and organized the first Static Roots Festival in June 2016. Actually we wanted the festival to take place somewhere in Mülheim, talked to the guys at Ringlokschuppen Mülheim for about three months until they found out they don’t want to do the festival “because it would not cover the cost” (which is quite ridiculous when I am supposed to be the one coming up for the cost).

We finally ended up doing the festival at the fabulous Zentrum Altenberg in Oberhausen: fantastic location, great people, amazing stage/sound/lights. Since my wife and I had a lot of anniversaries in 2016 we turned the event into a charity event for the benefit of Doctors Without Borders (Ärzte ohne Grenzen). The festival was a great success and we collected more than 9.000 EUR through it!

The Static Roots Festival 2016 has been voted by writers and subscribers of LonesomeHighway.com as one of the three best Americana festivals of 2016 – next to AmericanaFest (Nashville, USA) and Kilkenny Roots Festival (Ireland). Mental: Nashville, Kilkenny and… Oberhausen!

Looking back at the house concert series “Raumfahrtzentrum Saarner Kuppe” here are some highlights: