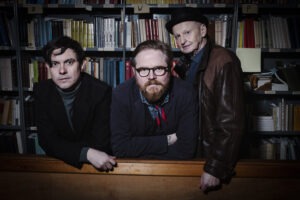 This is simply too good to be true: a couple of weeks ago I got a copy of the yet to be released debut album by Bennett Wilson Poole. Blown away by the first listen, these guys sound like the British Crosby, Stills, Nash & Young! And even better, they fit in PERFECTLY into the line-up of the Static Roots Festival 2018.

Some information from their press release:

“As the new year gets underway and we long for light and warmth like a breath of fresh air born on a shaft of sunlight, the sensation-rich sounds of Bennett, Wilson, Poole are unveiled. A colourful, magical, cosmic English music conjured in rural Oxfordshire by an exceptional trio whose multi-faceted creative capabilities and personalities are alchemised into a majestic whole.

Danny Wilson (Danny And The Champions Of The World), and Robin Bennett (The Dreaming Spires, Saint Etienne) join forces with Tony Poole, producer extraordinaire, and King of the electric twelve-string Rickenbacker. Combining their voices, guitars, and songwriting to marvellous effect in a collection of songs that began as uplifting acoustic music and just grew into something far more wide-ranging and transcendent, providing balm, inspiration and succour for these troubled times.  Bennett Wilson Poole is released on April 6th on Aurora Records (through Proper Music Distribution). In past times we would have called Bennett, Wilson, Poole a supergroup. We could do still. Certainly, the roots of this collaboration lie back in those very different days, back in the 70s with a man called Omaha. Peter O’Brien, editor of the legendary fanzine Omaha Rainbow, was a great friend and supporter of Starry Eyed And Laughing, the English Byrds, whose precocious young guitarist, one Tony Poole, could dazzle on the twelve-string Ricky.

Peter was a schoolteacher in South London, and one of his charges would be the young Danny Wilson. Danny went on to form bands with his brother Julian; Soulgreen and then Grand Drive; and Peter took Tony to see them and made the introduction. Meanwhile, Robin Bennett and his brother Joe, out in Oxfordshire, were founding the Truck Festival and performing as Whispering Bob and then Goldrush, basing their two-part harmony style on that of Julian and Danny with Grand Drive. In the aftermath of Grand Drive Danny connected with the Bennett brothers who formed a major part of the floating first incarnation of Danny And The Champions of The World, and when they left to concentrate on The Dreaming Spires he saw it as the perfect time to work with Tony. It turned out really well: “He has an incredible overview and vision. On Hearts And Arrows (2011) he came out with some of the most incredible signatures on songs, some of the best parts I’ve ever heard myself framed by. He’s probably the most talented person I’ve ever worked with. So I always wanted to do it again.”

Through Danny, Tony would soon meet, and later work with, the Bennett brothers: “I remember dropping in to The Spires’ studio at Steventon one December to listen to their latest songs, and Joe put an electric twelve-string in my hands”. He would help them out with both their Searching For The Super truth album and the Paisley Overground project for Brighton’s At The Helm Records.

Around the same time Danny and Robin were trying to make good on a long-held intention to write together, and failing to contrive meetings in person they connected on Facetime. It proved successful; three songs came from the hook-up and Robin would wake the following morning with another running around his head. They realised there would be enough to make something of this and they also recognised they needed to be working with Tony.

Over a handful of weekends the three would gather at Tony’s home studio outside Brize Norton. All the basic tracks were put down live with three mics and three guitars; originally envisaged as a kind of Crosby, Stills and Nash acoustic album, the songs seemed to cry out for more, so it became, in Tony’s words a “combination/gestalt of a lot of the music we love and are inspired by”.

Throughout the three voices meld together in a wonderful way, and there’s a sublime richness of correspondence, echoes of harmony, and mirrored sounds. The opener ‘Soon Enough’ exemplifies this. It’s a refugee from a “bleak” solo album Robin has planned but the rousing start suggests something much brighter. The trio share the vocals, each taking a verse – a pattern we’ll meet regularly – and the song’s Zen outlook (“Life is a mystery train, never know when it’s arrived. The journey is all we have to let us know we’re alive”) is complemented by compelling guitar embellishments and magical interludings of backwards Rickenbacker.

On the Thursday before the first of their weekends Jo Cox was murdered and in response Tony started writing ‘Hate Won’t Win’. It was recorded acoustically, Tony added some guitar and then he worked on it. The others were amazed at what he came up with; as Robin says “It’s like being a kid at Christmas with Tony, something will just arrive and it won’t exactly be what you’re expecting. A song in your head you thought was going to be a twelve-string Byrdsy thing turns out as something entirely different”. The song was up on YouTube by the following Tuesday, Jo Cox’s birthday; the intention, the spirit and the delivery plainly inspired by Crosby, Stills, Nash and Young’s ‘Ohio’.

You can get further hints of Neil Young in ‘Ask Me Anything’; a Crazy Horse stalk overwritten with a Wilbury patina, ‘Funny Guys’ exemplifies the Grand Drive vocal influences, while ‘Hide Behind A Smile’ is the most bitter-sweet of songs with beautiful sentiments (“You can ride your horse to win but that’s not the race we’re running in”) and a particularly lovely bridging verse running into the second half of the song.

The song Robin had woken up with was ‘Wilson General Store’ which as the title might suggest is based on Danny’s family history.  Danny’s grandparents had a shop in Melbourne called ‘Wilsons Emporium’, “but it’s hard finding a rhyme for emporium. And after writing with Dan in the evening I woke up with ‘at the Wilson General Store’ going round my head, so I got up, had breakfast, and finished it.” It has a 60s psychy magic toyshop vibe to it (“At the Wilson General Store there’s a doorway but there isn’t a door”) and a divine finale.

It was a fascinating collision of ways of working. Robin and Danny have families and other pursuits, and so will seize the moment, while Tony has the time, space and wherewithal to be more considered. The ‘let’s get it done! ‘attitude was imposed on Tony’s unfinished ‘That Thing That You Call Love’ and it led to “probably my best co-writing experience ever when the three of us finished that song in about twenty minutes. It was a Sci-Fi ‘one mind’ experience”.

The same thing happened, but more so, with ‘Lifeboat’. Tony had started writing that after seeing a photo of a refugee boat in the Mediterranean adjacent to an article on ‘selfies’. Robin and Danny helped him finish it and he put down the rhythm track while they were picking up lunch from the local supermarket. They then played the electric lead guitar parts live to it in one unedited take, and they also sang all the choruses live. “It sounded so much like Neil Young’s ‘Down By The River’ that I was scared to do anything to it but leave it as it was in the mix”.

The album is testament to Tony’s particular production and musical talents. It gives of itself only gradually, continually revealing more layers and aspects that even its participants didn’t really grasp initially. Tony would grab the initial energy, and then take the magnifying glass out and get to work at what he wants to do. It still sounds fresh even though he’s crafted it over for many hours; which is the trick, of course, that so many strive for and so few achieve.

All three speak in the rosiest of terms of the collaboration and their excitement at its imminent release is palpable. That it will arrive in the season of renewal and rebirth seems entirely appropriate; “Out of all the records I’ve made, it’s the one that, on the point of release, I still really, really love as much as I did at the moment we finished it.”

“Authentic Americana doesn’t get any more reverent, respectful or remarkable than this” No Depression

“takes Americana and makes it their own” Americana UK

“If summer ever arrives, this will surely be the perfect soundtrack to it” Red Guitar Music

A bit of acting and posing here, but you’ll get to hear a bit of the great song “Wilson General Store”