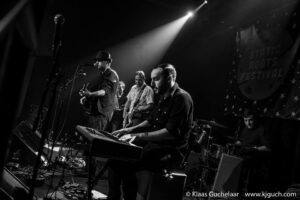 Willie Meighan. The Boss. A legend in the Irish Music scene, organiser of the Kilkenny Roots Festival, owner of Rollercoaster Records (Kilkenny) – “the happiest little record shop in the world”, one of the kindest and gentlest person you could ever hope to meet. When this legend of a man, who left a lasting mark on the heart of everyone he met, died way too young in late 2017, we decided to have an act at the Static Roots Festival playing in remembrance of and to celebrate this great man.

And could there be a better match, than Kilkenny’s own The Midnight Union Band?

Here are some beautiful words, written by our friend Bren from Kilkenny:

“2016 brought Kilkenny’s finest The Midnight Union Band to the first Static Roots Festival. As exited all us Kilkenny folk were, there was one man in particular that was “blown away”, Willie Meighan. As the lads played Willie watched with the biggest smile on his face & memory remains as he said “I have two things to say, one: I’m so happy right now & two: I love these lads and to see them up on stage playing makes me want to cry with proudness”. Shane Joyce & Willie would often have lengthy conversation about his music. Shane always appreciated these chats & took direction from Willie’s words. To have the boys play this year in remembrance of Willie is a perfect fit. We will always love & remember Willie & know he would be “blown away” by this gesture.”

===
“The Midnight Union Band’s  music may best be described as a unique blend of Americana, Folk, Rhythm and Roots and Blues, nestled with an alt-country twist and a sprinkling of pure sweet Rock n’ Roll.”
Kilkenny Roots Festival

“A wonderfully vibrant mix of Americana, folk and classic 70’s blue-collar rock’n’roll, this Irish band deliver politically charged songs bristling with intent and conviction whilst charming their way right into your heart.”
The Musician, Leicester

” Where Joyce particularly excels is in his live performances as punters who have enjoyed The Midnight Union Band gigs will be aware of.  He is a confident frontman, who possesses the required intensity and natural ability to immediately engage his audience – not always an easy task.”
LonesomeHighway.com

“This is one of those albums that reaffirm your faith in music and it shows that while we may increasingly be living in an X Factor gutter there are still musicians out there looking at the stars.”
Jeremy Searle – americanaUK

“Solid heavy alt-country rock in the vein of the Drive-by Truckers has been hard to come across in Ireland. Lucky then The Midnight Union band appeared.”
http://eirecana.com/

“The Kilkenny band’s sonic landscape is incredibly vast: ranging from the most poetic and tender of ballads to fully fledged anthems that host an unrivalled energy. Their tunes bring a fresh twist on the classic sounds of Bob Dylan, Neil Young and The Band that have inspired them over the years.”
Whelan’s, Dublin