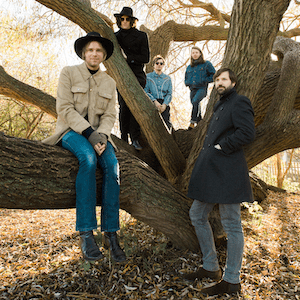 In April of 2019 this excellent, London-based band will support the re-union tour of legendary 80s country-rockers, The Long Ryders (w/ Sid Griffin). They call their style of music “Cosmic Country / Psychedelic Folk” and they will most certainly put a smile on everyone’s face with their jangling guitars and most beautiful harmonies underlined by a great pedal steel guitar.

Blending folk pastoralism with swampy 60s Americana, The Hanging Stars sound like the missing link between the California desert sun and the grey skies of London Town. The album was recorded between LA, Nashville and Walthamstow, with each of these vastly different places leaving an indelible mark on the songs. Their debut album Over the Silvery Lake came out in March 2016.

The band is made up of songwriter, singer and guitarist Richard Olson, Sam Ferman on bass, Paulie Cobra on drums, Patrick Ralla on banjo, guitar, keyboards and assorted instruments, with pedal steel courtesy of Horse and Joe Harvey Whyte.

The Hanging Stars place themselves firmly as part of a long folk tradition encompassing European and North American influences – as a continuation rather than a pastiche of these styles. On the back of their album release, The Hanging Stars played sold-out shows at The Finsbury in Manor House and London’s The Lexington for an end of year extravaganza. They also shared the stage with Teenage Fanclub at their sold-out show at Islington Assembly Hall and played at the Liverpool International Festival of Psychedelia.

“An album with enough of a hazy, sun-dappled charm to make the capital’s dreariest weather bearable.”  – The Times 4*s

“A promising debut from London’s The Hanging Stars, who switch deftly between deliciously sentimental Americana and swaggering psychedelia.”  – Uncut

“a hazy, desert-dream of a song, nicely sharpened with steely-eyed guitars, Mersey-laced harmonies and just a whiff of the Gun Club.” – Guardian

“Swampy psychedelia that recalls the Medway Delta as much as the Mississippi, the band’s new single neatly conjoins these influences.” – Clash

“What’s better that Country Joe and the Fish, Crosby Stills and Nash, and the Byrds? A group that sounds like all of them!
Just one of the most talented groups around” – amazon review

“This is another worthy addition to the British branch of the Parsons legacy library curated by the likes of Teenage Fan Club, The Goat Roper Band and Lewis & Leigh.” – Folk Radio UK

“These are stars that shine as much as they hang.” – The Quietus

“You might recognise members of the See See and Coastguards within the ranks of this group but Hanging Stars are trippier that their parent bands – or more “cosmicious”, as they describe themselves on Facebook. A brilliant debut for fans of melted country and acid psych.” – Sounds XP