The Hiders - It's Already Over

"...a great live experience, tons of great songs...The Hiders are real contenders. They bridge the musical gap as well as any band I've heard in a long, long time... very musically robust Americana ...that reminds me of Sparklehorse, Emmylou Harris, The Band, Kathleen Edwards, Destroyer, and folkie psychedelia of early VU.”, WXPN/WorldCafe

About a dozen years ago we got hold of a copy of The Hiders’ fantastic album “Penny Harvest Field” and instantly became fans of their intense, harmony driven psychedelic folk-country rock. Their 2017 release “Unsheltered Storm” turned into one of our “albums of the year”.

No question, we had to invite The Hiders from Cincinnati, Ohio, USA to contribute a video to our “stay safe sessions”. Only a couple of weeks before the release of their 8th album “Forever At The End”, The Hiders recorded a fantastic song of the new album called “It’s Already Over” for our video series.

The Hiders in the current incarnation are: 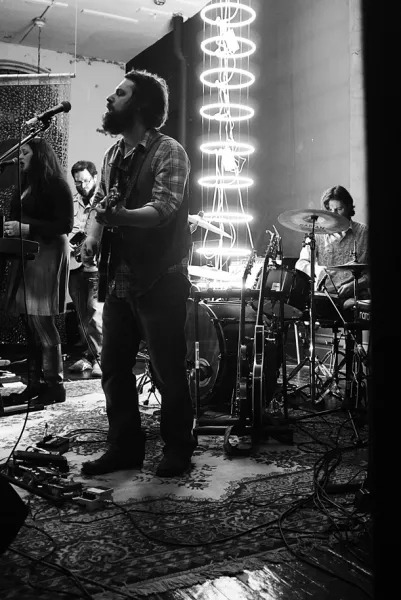 Tennessee Williams once suggested that “Time is the longest distance between two places” but for The Hiders time exists “All at once and never again”. The latter quote is from the title track of their upcoming 2021 release ‘Forever at the End’. The title is inspired by the effect of an Event Horizon, named such for being the boundary defining the region of space around a black hole from which nothing ( not even light ) can escape - a singularity - a horizon beyond what we can see. Cryptic, I know. Some things are harder to describe and best perchance experienced.

Formed officially in the early days of the 21st century in Cincinnati, Ohio, The Hiders 2006 debut ‘Valentine’ was met enthusiastically in the realm of Americana. Their sound, described often as an intriguing mix of folk, rock, and psychedelia, filled the remaining open spaces between the likes of Neil Young and Sparklehorse, or even the twilight separating Gillian Welch and Black Sabbath.

Over the course of seven albums members have come and gone so The Hiders act informally as a duo, featuring founder and vocalist/guitarist Billy Alletzhauser and long time co-vocalist Beth Harris, bringing in musicians as needed. The two met performing together in a production of ‘Hedwig and the Angry Inch’ and have never looked back. Their vocals blend together seamlessly, less a duet and more one voice, and is the bedrock of their sound.

As of 2021, The Hiders record, mix, and produce their own music almost exclusively, giving an even more unique twist to their robust yet ethereal brand of  roots inspired rock.