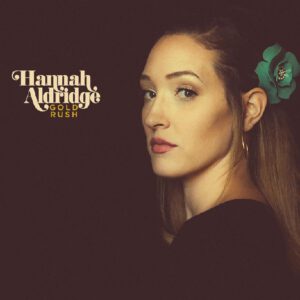 For her debut album “Razor Wire” (2014) she was described as Muscle Shoal’s own “Americana princess”. With her 2017 album “Gold Rush” and tons of raving reviews, she ended up in many best-of-lists and it seems she might have climbed the throne.

We are very much looking forward to welcoming Hannah Aldridge (now Nashville, TN, USA) to the Static Roots Festival 2018!

===
Americana is the perfect concoction of American roots music that comprises our musical ethos as we know it today. It is something so engrained in our history, folklore, tradition, and mythology that it is not as simple as just “becoming” Americana, but rather, it is something that you are born into. It’s that old cast-iron Coca-Cola sign that’s been in your neighbor’s shed for 50 years, a banjo and a Fender telecaster playing together, a 1955 Chevy with a modern stereo.

There are few artists that can truly encapsulate the essence and true range of Americana like Muscle Shoals artist Hannah Aldridge, whose musical pedigree precedes her and speaks for itself.

Hannah Aldridge is the daughter of Alabama Music Hall of Famer Walt Aldridge, who is one of the most prolific songwriters of the modern musical era. Twice named by Billboard magazine as one of the Top Country Songwriters of the year, ASCAP Songwriter of the Year, and countless Number One and Top Ten hits recorded by the likes of Lou Reed, Reba McEntire, Travis Tritt, Earl Thomas Conley, Ricky Van Shelton, Ronnie Milsap, and Conway Twitty.

With sounds ranging from blues in the Mississippi Delta to the dusty, dixieland jazz sounds from New Orleans, the musical stylings of Muscle Shoals on up to the primitive roots of American Country music, Hannah Aldridge leaves no inspiration or influence untapped.

“I think people have forgotten what real drums and real voices sound like. We have been so overexposed to these pre-packaged “#1 hits” that when there is anything that has any glimpse of truth or rawness to it, it is like a fresh breath of air. Americana music really is lyrically driven and is meant to make people think, which is the total opposite of most of the stuff out there on the radio, so I think that naturally people are being drawn towards it.” says Aldridge.

Besides being a seasoned staff songwriter for BAR Music with song placements in television shows like Hart of Dixie(CW) and recognition from American Songwriter as well as Relix Magazine, her vocal talents rarely go unrecognized, something that lends itself to being true to the Americana methodology of not using excessive “talent-enhancing” techniques in the studio or live. Both her natural and cultivated talent help her to emote with both listeners and musicians alike on a truly organic level.

Seasoned by both life events and musical events since the release of her first EP, “Wanderer” in 2011, Hannah’s upcoming release “Born to be Broken” shows a stark difference of growth in musical sensibility, writing, and maturity.

Hannah has toured all across the United States and Europe gaining a grassroots movement of fans that wait in silent adoration of the return of their Americana Heir Apparent Princess of Muscle Shoals.

===
Gold Rush “(…) is at turns wild, introspective, celebratory, regretful, boisterous and gentle, it is rock music with depth, country music dressed in rags rather than rhinestones, folk music with added Muscle (pun intended!) This is nothing short of Americana with a PhD!”
Dave Franklin

“Hannah Aldridge opened the evening, and (…) she proved a powerful presence before she had even sung a note. If her voice was off I didn’t notice, and she held the crowd captivated as she worked her way through a stunner of a set showcasing her unique brand of “dark Americana”.”
nashvilleoverhere.com / All Things Country

“Unquestionably one of the best Americana albums of the year,  she’s struck the mother lode.”
folkradio.co.uk

“Anyone who feels like that has found their favourite album of the year. But then so good is “Gold Rush” that anyone who just loves great music and wonderful songwriting has probably found theirs too.”
Maximum Volume Music

“Hannah Aldridge and Lilly Hiatt – too much talent for one small room. (…) The weakness is that they shouldn’t be here; instead of playing to tens of people they should be performing in front of hundreds, if not thousands. These women are major musical talents. Unfortunately the world doesn’t know that. Yet.”
Carl Parker, No Depression

“ 33 seconds into Lace, there’s a ringing seventh chord that sends chills running down the spine. Hannah Aldridge’s strong, sultry vocals snake around the melody like a wisp of Marlboro smoke on the longest track across the 10 songs on Gold Rush. A barfly’s southern-gothic epic of a tale. And that there is the trick; to hit the right note over the right chord to the right beat singing the right lyric. And Aldridge appears to have mastered this hallowed trick on these songs of self-destruction.”
Hifi Pig Magazine

“Hannah Aldridge. Remember that name because, I suspect, you’ll be hearing a lot more of it. “Gold Rush” may well be the best “non-name” release of the year to date but though Hannah Aldridge herself is not that well known yet (and it really is only a matter of time) you may recognise the surname, since her father is well respected Nashville songwriter Walt Aldridge – proving yet again that old adage that the fruit doesn’t fall far from the tree. But Hannah’s songs are a far cry from her father’s more mainstream Nashville sound; her’s is an Americana voice by way of Southern Rock with more than a hint of Southern Gothic in the storytelling. This is dark stuff drawn from a difficult young life and she lays her soul out in this, her second album, with spine-chilling candour.

A veritable star in the making – the future Queen of Southern Gothic.”
Rick Bayles, americana-uk.com

“Fabulous. That one word says it all – do I have to write any more? Ok, time to use your imagination… wouldn’t a more urban Gillian Welch backed by The Stones in their country influenced days sound wonderful? In my mind it would and, in my mind, it has happened and is called Gold Rush by Hannah Aldridge. How on earth do I, logically, back up this claim? I don’t think I can – it’s just the feel, sound, emotion and passion, that sears through this album like a branding iron, that has me in its grasp and reaching for the repeat play button”
Ian Ambrose, Maverick

“Quite simply, this is heartfelt and of the highest quality; music made with love – 9/10”
Max Mazonowicz, The Digital Fix

“Hannah Aldridge’s fan community is growing, both in this country and elsewhere in Europe. It’s going to keep growing with this album, there’s no doubt about it.”
Rune Torsteinsen, musikkbloggen.no

“Good things come to those who wait may be sauntering into cliché territory, but GOLD RUSH repays the patience of existing fans in plentiful portions. Its strength is a testimony to the way that Hannah Aldridge goes about making music. No half measures, plenty of passion and a cutting edge that frames the message so vividly. This record extends her talent, seals the initial promise of 2014 and points the way forward for an artist who is a key architect of Americana music across the boundaries of its horizon.”
ThreeChordsAndTheTruthUK.co.uk