Sometimes when something goes wrong, something even better comes out of it: Unfortunately Donald Byron Wheatley wasn’t able to come to the festival, but this allows us the opportunity to present the great Hadley McCall Thackston from Decatur, Georgia, USA: 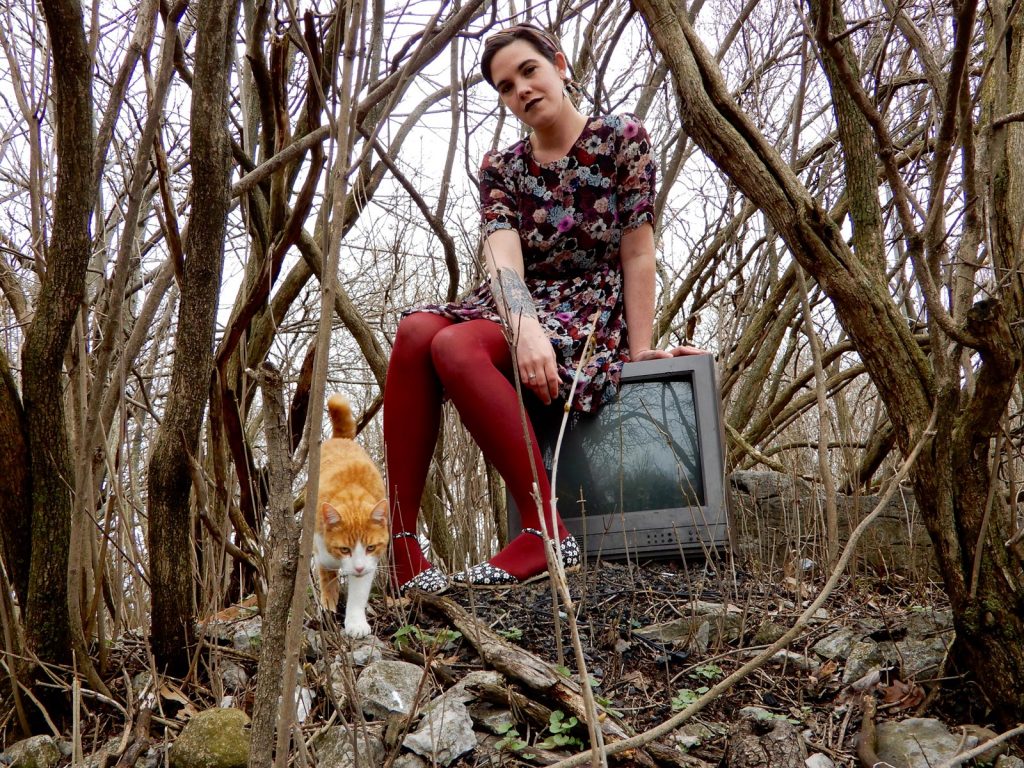 A couple years back, the 25-year-old Hadley McCall Thackston was at a crossroads. Her singing voice was a natural gift, one integrated in her life from day one.  “My mama swears I sang before I talked,” Hadley says, “so I guess I didn’t have a chance to overthink it but in my teenage years I struggled with anxiety and depression and seemed to have lost that connection to myself.”

However, in her early 20’s, after returning from a year of drama school in Ireland (where she discovered she had more passion for music than theatre), song ideas were forming — but the matter of shaping her own songs in the shape of her heart was still at hand.  She took solace on her home town porch in Decatur, Georgia, took out her guitar and started to tap into her creativity.  “I started to discover my preference for being outside when I write, and I love the fact that I can be outside but under shelter at the same time. Porch-sittin’ is more of a communal tradition,” she added, “but at first, I didn’t really want to put anyone through my still tentative song-birthing process.”

As her confidence grew, the self-described “porch sitter” slowly started to unofficially premiere her songs for family, friends, and neighbors. Thus, the songs on Thackston’s debut eponymous record happened to have been written on various porches from Decatur, Georgia to Cedar Mountain, North Carolina to Wolfe Island, Ontario.

It was also an act of social media fate that coincided with Hadley’s trajectory which brought some cool, random threads together. Her best childhood friend, Wyeth Wood, finally convinced Hadley (who was quite the opposite of a social media maven) to post a clip of a porch performance on Facebook. Within minutes, David Corley — a long-time friend of Hadley’s mother — and a singer-songwriter whose own path to his debut album is an unusual story unto itself— happened to catch the clip and sent it off to his producer Hugh Christopher Brown.

Brown reached out and before Hadley knew it, she ditched her tentative plans to record a demo or two in Nashville and landed on Wolfe Island, Ontario, with a hat box full of songs, and began recording them with Brown in the captain’s chair as her mentor, engineer, arranger and producer.

In this alt-country chanteuse-songwriter’s mind, timeless is always contemporary, whether she is writing and singing about her personal views on spirituality (“RedBird”), her search for love and romance (“Somehow”) or her feelings on social justice issues (“Change”).  The music and arrangements flow and shift seamlessly with every sentiment, all the while gently crossing genre boundaries – as with the breezy, jazzy feel of “Ghost” or her pop/Motown-infused groove on “Ellipsis” with lyrics that reflect her quirky charm.

As for “Butterfly”, which opens the album, Hadley lays out the song’s evolution: “This song came to me in two parts. The first half of the song was inspired by a young friend of mine. The second half was written after my niece Caroline was born. Two girls, one just starting high school, one just starting her life. I wanted this song to encompass the journey we go through from girlhood to womanhood. And to embolden young women to own their strengths and weaknesses regardless of what anybody believes.”

The album closes with “Last Mountain Waltz,” a beautiful ode to her beloved late grandparents and the majestic mountains surrounding their home in South Carolina.

Upon hearing Hadley’s voice for the first time, the listener may have a similar reaction to her producer Hugh Christopher Brown who said, “Hadley has a timelessness to her exquisite voice and sensibilities that could make her a star of any era.”

===
“A new artist finds her voice during an unforeseen pilgrimage that starts in Decatur, Georgia and leads her to an old post office on a remote island of Ontario, Canada”
CRS Distributes Thackston’s Record Across Europe

“Thackston has unleashed one hell of a debut album, a timeless iteration of Americana, alt-country, or whatever the heck we are calling it this month.”
Fervor Coulee

“exquisite vocals…Thackston’s eponymous debut album [is] one that’s sure to win the hearts of many on first listen.”
Alex Gallacher/Folk UK Radio

“Hadley McCall Thackston has a special voice reminiscent of Jolie Holland’s, but also has the irresistible (and elusive) voice that Natalie Merchant has. It lifts the debut of the young American high above ground level. It is a debut that overflows with promise, but also a debut that can immediately go with the best records of the moment in the genre.”
Erwin Zijleman, DeKrentenuitdepop (Netherlands)