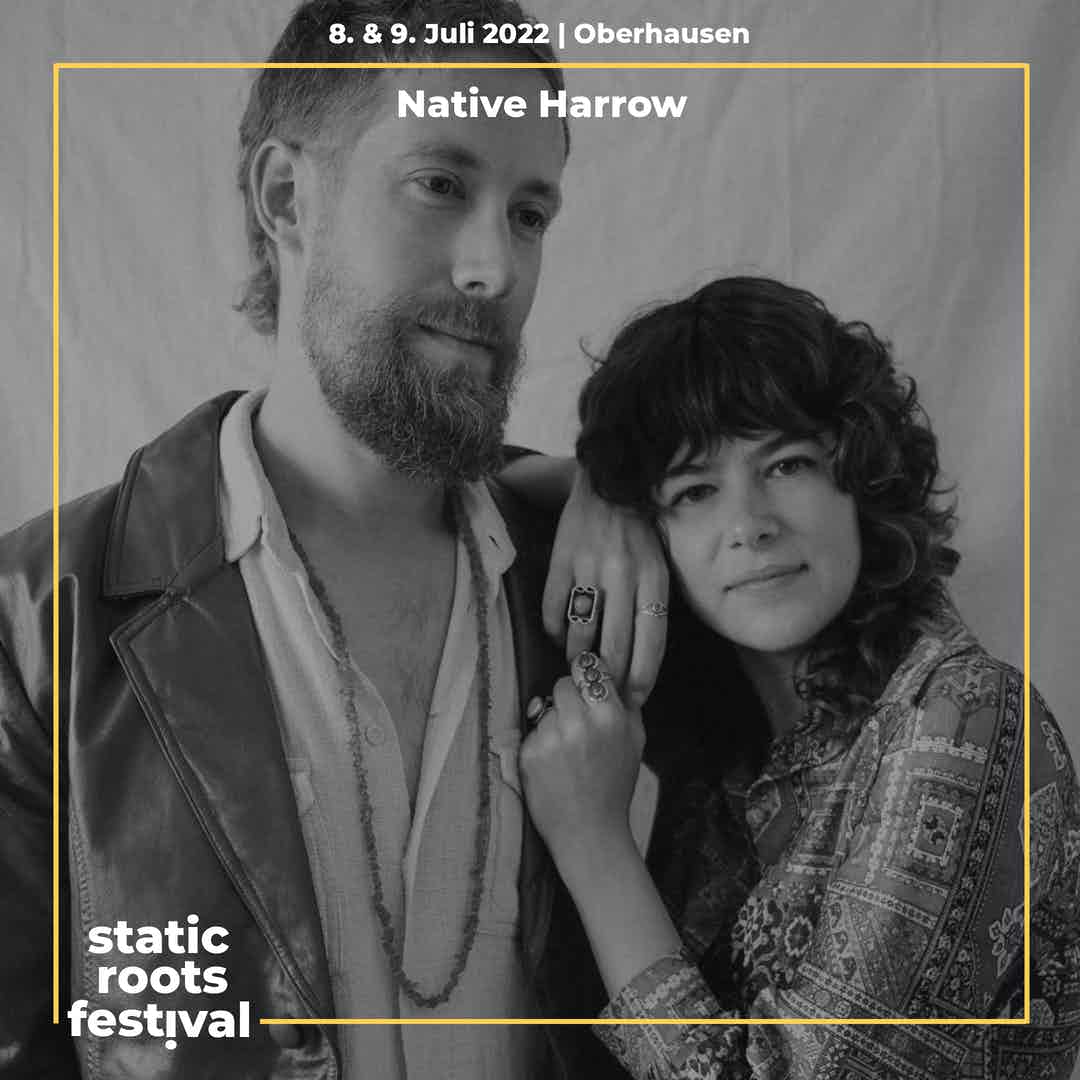 The critics love their album "Happier Now" as the band takes you on a journey through time to the flower power era of peace, love and rock'n'roll. Loose Music's new star Native Harrow from Woodstock, NY, USA, will shine brightly at the Static Roots Festival 2022. 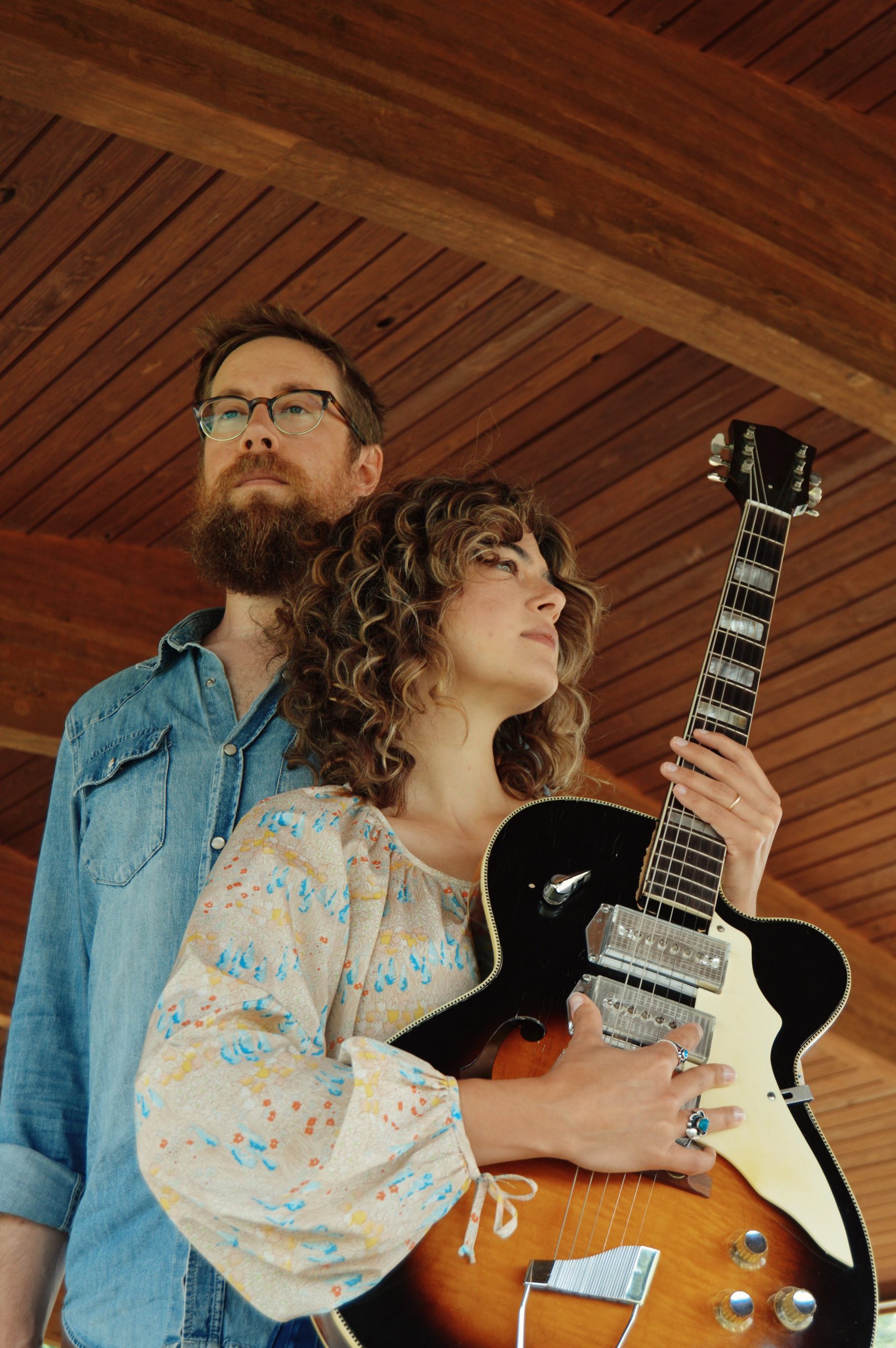 Devin Tuel may consider herself to be an artist meant for a different time, but she now finds herself inhabiting her own true place. The singer-songwriter is at home in Upstate NY reflecting on her third album, Happier Now, released under her nom de plume, Native Harrow, as well as the difficult sojourn the former ballerina and classically trained singer has had to traverse to become the writer and performer she was meant to be. “This record is about becoming your own advocate. Realizing that maybe you are different in several or a myriad of ways and that that is okay. And further, it is about me becoming a grown woman,” Tuel says.

After nearly two decades of rigorous training in ballet, theatre, and voice, Tuel needed to break out of the oppressive rules of academia and find her natural voice, write from her heart, and figure out what kind of performer she truly was rather than the one she was being molded into from the age of 3. “I spent my early twenties playing every venue in Greenwich Village, recording demos in my friends kitchen, and making lattes. I felt very alive then. I was on my own living in my own little studio, staying up all night writing; the dream I had of being a bohemian New York City artist was unfolding. I wanted to be Patti Smith. I was also heartbroken, poor, and had no idea what I was getting myself into. My twenties, as I think it goes for most, were all about getting up, getting knocked down, and learning to keep going. I never gave up and I think if I told 20 year old me how things looked 9 years later she’d be so excited”.

Happier Now (out April 12 on Different Time Records), is a set of nine songs recorded and mixed by Alex Hall (JD McPherson, The Cactus Blossoms, Pokey LaFarge) at Chicago’s Reliable Recorders. The album was co-produced by Hall, Tuel, and her bandmate, multi-instrumentalist Stephen Harms.

Native Harrow cuts out clear and vibrant narratives on fear, love, the open road, ill-fated relationships, and coping with the state of the world. “I wanted to share that I made it out of my own thunderstorm. I had experienced the high peaks and very low valleys of my twenties. I saw more of the world on my own, got through challenges, reveled in true moments of triumph… but all the while the world around me was growing louder, wilder, and scarier. Music for me is a place to be soft. This album was my place to feel it all.”

Happier Now’s nine songs were written during three back-to-back tours across North America supporting the band’s second album, Sorores. The album was recorded in just three days in March 2018 during what Tuel jokingly calls “downtime” in the middle of the grueling 108 date tour. Tuel approached the sessions like a musicians’ workshop, each morning beginning with the songwriter presenting her collaborators with the day’s material. The trio rehearsed and documented each song live on the floor, tracking as a band through each take. No click tracks, scratch tracks, or even headphones; just three musicians in a small room, captured with Hall’s collection of vintage mics and some subtle retro production techniques. Overdubs, including vocal harmonies, B3 organ, Rhodes, and the rare lead guitar were added to decorate these live performances.  The creative energy of the tightly-knit sessions spilled over into Tuel’s songwriting as well - she skipped lunch on the third and final day of recording to pen the road-weary “Hard To Take”. Four days after arriving in Chicago, Native Harrow was back on the road and Happier Now was complete.

Happier Now oscillates between feeling the sting of uncertainty (“Can’t Go on Like This”), the beauty of California (“Blue Canyon”) and the ache for lavish stability (“Way to Light”). You could say Tuel wears her heart proudly on her sleeve, but that’d be underplaying the exact gravity of her stories. Each starlit image is framed within her warm, enveloping vocals and the careful, profound considerations of Harms’ musicianship. Start to finish, the new record pours forth from her very bones, and you get the overwhelming sense she has never been more daring and honest than right now.

“- East Coast duo summons the spirit of bygone folk-soul -
Singer and guitarist Devin Tuel resides in Upstate New York, though her spiritual home is California, specifically boho Laurel Canyon at the turn of the ‘70s. Alongside multi-instrumentalist Stephen Harms, Tuel records as Native Harrow, her wondrous voice evoking both Judee Sill and early Joni Mitchell at their most wistful, particularly on “Can’t Go On Like This” and “Hung Me Out To Dry”. The use of vintage gear adds weight to the sensory impression of another era, as the duo (plus co-producer Alex Hall) craft timeless folk-rooted confections and, on the organ-fired “Something You Have”, Muscle Shoals-like- Southern soul. ”
— Rob Hughes, UNCUT Magazine September 2019 Print Issue

“Set of disarming, powerful reflections on love and life... timeless melodies and warm arrangements of guitar and percussion ensure an intimacy and immediacy that’s impossible to escape. ★★★★”
— ISLINGTON GAZETTE

“‘Can’t Go On Like This’ calls to mind the folk-pop giants of yesteryear, but vocalist and guitarist Devin Tuel’s flowy, spiritual voice is timeless, and its fluttering beauty will spark a lump in your throat. Wrapped around a general sense of self-doubt are discernible tones of gentle warmth and humble charm, and its healing qualities shouldn’t be underestimated.”
— Lizzie Manno, Paste Magazine

“This is a captivating, almost mesmeric album of the highest quality...the excellent ‘Something You Have’ is gospel-tinged while both ‘Blue Canyon’ and the title track ‘Happier Now’ could have been recorded by a young Joni Mitchell. 8/10”
— AMERICANA UK

“It’s hard to be utterly timeless and refreshingly original, but Native Harrow manages it with ease.”
— FOLK RADIO

“The band’s new Happier Now feels much more in the here, in the now…sort of. Sure, points of reference include mid-70s Joni (“How Do You Do Things”), the gospel-leaning side of The Band (“Something You Have”), and the most upbeat Fairport Convention moments (“Can’t Go on Like This”), but their music is not frozen in the distant past by any means. Frontperson Devin Tuel has a soul-filled voice and a perspective that considers the world surrounding her through the lens of what came before and led us to this point — whether it be her childhood informing her adult emotional state, or the music of another generation rippling into her own.”
— John Vettese, WXPN The Key

“Gorgeous folk and Americana tinged sounds… Something You Have is a wondrously swoonsome ode.”
— RECORD OF THE DAY

“The album has a cool Greenwich Village vibe to it so check it out if the likes of Fred Neil is the bag you’re in.”
— BLABBER ‘N’ SMOKE

“A potent folk rocker with old bones. There is a sense of Americana, of 60’s protest songs, or people of all colors making something happen, of Joni Mitchell and Sandy Denny.”
— Robb Donker, American Pancake

“The band have really hit their stride here, coming into an even more soulful folk style, exhibited on “Something You Have” by roiling organ and Devin Tuel‘s serene vocals.”
— American Standard Time