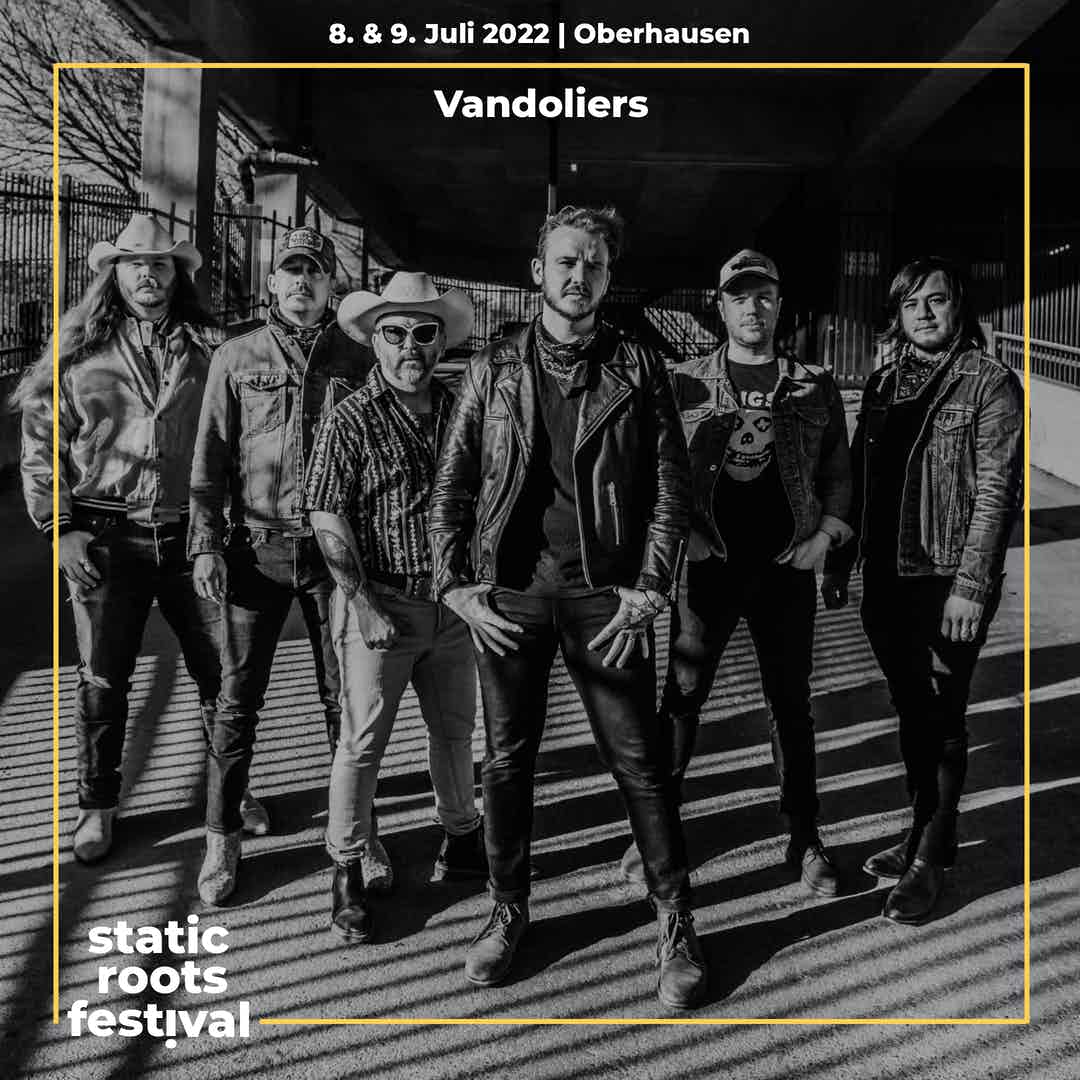 Vandoliers are very much part of the next wave of Texas music scene. The Dallas / Forth Worth Six-man band channels everything that makes the vast state unique; tradition, boldness and train. As they tread along muddy roads like country punk bands such as Old 97's, Jason & the Scorchers and the True Believers formed during the 1980s and 1990s, Vandoliers define their own style; and no one puts the genre on their head like them. There are twang and tattoos, tenacity and guitars, honkey-tonk and blow-riffs, Tejano and Telecasters. It's Vandoliers! Prepare for a rare contagious live experience.

Vandoliers are the next wave of Texas music. The six-piece Dallas-Fort Worth group channels all that makes this vast state unique: tradition, modernity, audacity, grit, and—of course—size. Forever puts it all together for an enthralling ride down a fresh Lone Star highway.

Produced and recorded by Adam Hill (Low Cut Connie, The Bo-Keys, Deer Tick, Don Bryant, Zeshan B) at American Recording Studios in Memphis, TN, the band’s third album (and first with Bloodshot) Forever is a mix of youthful and defiant punk, rugged Red Dirt country, and vibrant Tejano. The full-length’s 10 songs blend emblematic rock ‘n’ roll with bold horns, violin, and a slather of twang reflecting where the band is from, where they’ve been and, eventually, where they’ll be headed. It’s regional and universal all the same.

“I wrote a series of songs about my life and gave it to the best musicians I know to flesh out,” says lead singer and guitarist Joshua Fleming. “I spent over a year writing by myself, with friends and mentors, and we spent just as long filling out arrangements and writing scores. We wrote horn and fiddle parts on a trio tour through the mountains of New Mexico, Wyoming and Montana.”

One of those mentors is fellow Dallas-Fort Worth musician Rhett Miller of Old 97’s. The influence and tutelage of Miller and his bandmates helped sharpen Vandoliers’ Texas-bred, roots-based punk rock.

“Before the band started diving into the new material, I sent Rhett a bunch of acoustic phone demos,” says Fleming. “Being the amazing person he is, he sent me back a 3,000-word email of advice that read like a master class in the art of songwriting. Beyond their influence musically, they’ve really taken us under their wing, letting us play shows with them and giving us all kinds of advice along the way.”

While tracking alongside the muddy path that country-punk bands like Old 97’s, Jason and the Scorchers, and the True Believers blazed in the ‘80s and ‘90s, Vandoliers define their own style; no one else is upending the genre quite like them. There are familiar ingredients—Fleming’s raspy vocals, rousing sing-along choruses, and an infectious energy (like on the rippin’ “Sixteen Years”)—that lay down the foundation on Forever. But it’s the ancillary instrumentation that separates them from others. When they seamlessly inject punk rock with ‘60 and ‘70s country grime (“Tumbleweed”), old-timey fiddlin’ (“Miles and Miles”), Tex-Mex horn and violin (“Fallen Again”), and heartfelt balladry (“Cigarettes in the Rain”), a rich new sound emerges. References to the Texas Tornados, Social Distortion, Deer Tick, and Calexico can be made, but none fully capture the soul of the self-proclaimed “Converse cowboys.”

For a band that spends more than half the year on the road, “forever” is their credo of hope and determination—“VFFV” (Vandoliers Forever, Forever Vandoliers) is tattooed on the six members’ arms as an emblem of their solidarity and commitment to the collective, through good times and, more significantly, the tough ones. The album’s lyrics center on themes of dedication (“Sixteen Years”), being known as middle finger-throwing rabble rousers (“Troublemaker”), seizing adventure while traveling (“Nowhere Fast”), and addressing anxiety and depression (“Fallen Again”). When they return home from tour, broke and empty, they humbly look to their families for support (“Bottom Dollar Boy”), and unconditional love—despite their unconventional career paths—(“Tumbleweed”). Thus recharged, they can hit the road again, to spread the Vandoliers’ message with renewed fervor.

Regional music at its most inspired: taking an old tradition and giving it a hard twist.

Vandoliers are deadly onstage, delivering their cowpunk/ska/Tex-Mex blend with abandon.

They are as capable of summoning the passionate, galvanizing spirit of the Gaslight Anthem and the rowdy punk defiance of the Dropkick Murphys as they are siphoning the gas out of Jason and the Scorchers’ moonshining hot rod.

As if they were children of Jon Langford, this six-piece Dallas-Fort Worth group is the new face of insurgent country. You can taste the Texas dust in their mix of defiant cowpunk, rugged Red Dirt country, resilient Tejano, twang, and groove taken to the next level.

If there was a perfect remake of already perfect 'The Good, The Bad and The Ugly' or a 'A Fistful of Dollars' the only band that could pull off the soundtrack would be Vandoliers.

A triumphant Old West feel, something that puts you in mind of in the closing scene of an old John Wayne film — if, say, Guy Ritchie were directing it.

A six-piece cowpunk band that took Fleming's punk and ska roots and dressed them up with acoustic guitar, brass, and fiddle for a jet-fueled take on the Texas two-step.

...as if Calexico and Dropkick Murphys got together for a fiesta.

Blends their Texan identities with Tejano, cowpunk, Americana and classic country sensibilities, creating what may be one of the most interestingly cohesive sounds in decades.

The lyrical and instrumental foundations of Texas country greats delivered with an intensity usually reserved for punk rock bands like Rancid, Social Distortion...

With a boisterous mix of Telecasters, fiddles, horns, and banjos, the Vandoliers set late-night, honkytonk and bits of bluegrass against Joshua Fleming’s strained, punk rock croon.

They’re genre-bending, Tex-Mex punk that sounds like someone dropped NOFX in the middle of Corpus-Christi.