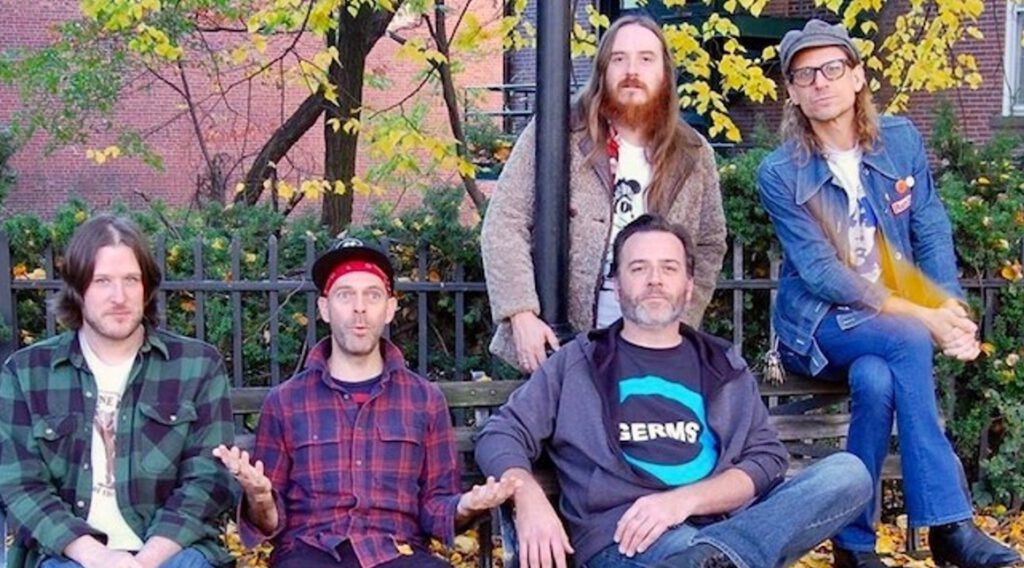 Singer-songwriter James Jackson Toth (better known by his nom de plume, Wooden Wand) and guitarist Nick Mitchell-Maiato (better known as the founder of UK psychedelic rock band Desmadrados Soldados De Ventura) met while James was on tour in the UK, back in 2008. They hit it off right away.

They not only discovered a shared love of Crazy Horse, The Grateful Dead, Little Feat, NRBQ and Dylan, but also realized they’d arrived at their mutual tastes via an uncanny trajectory through teenage metal goofin’, early adulthood Royal Trux obsession, years exploring the weirdo crevices of the improvisational psychedelic underground and a slow ascent back to the surface of celebratory, heart-wrenching guitar music.

In the years that followed, during a number of extended tour hangs in both Manchester, UK and Lexington, KY, they began talking about the idea of forming a band together. A band that would blend James’s bent for plaintive, sun-scorched lyricism and Nick’s craving for a return to the Cosmic American musical landscape that encouraged wilful abandonment of simple rock ‘n’ roll song structures into ecstatic, exploratory jams.

The idea finally began to take shape with the introduction of Dan Brown as bassist. Dan was the modal player who’d taken Royal Trux firmly out of scuzz rock territory and imbued them with the slick, busy, hard rock groove that punctuated that band’s major label period.

When Nick was offered the chance to submit a track to a forthcoming Bert Jansch covers compilation, he hit-up James and Dan to say, ‘let’s record next time I’m in the States.’ They agreed and, via recommendation from Sunburned Hand Of The Man’s John Moloney, drummer Ryan Jewell (Ryley Walker band/Psychedelic Horseshit) was brought in to provide a Levon Helm-like snap to their cover of ‘Open Up The Watergate (Let The Sunshine In)’. James suggested a number of names for the band and, rather than sit around arguing over the merits and failings of each, they quickly agreed on One Eleven Heavy, culled from the title of a 2009 short story by Michael Paterniti.

The ‘Jansch’ session, in Richmond, VA with Black Crowes engineer Jon Morand, went so well (with zero rehearsal prior to hitting the record button) that they agreed to get back together in a few months’ time to make an album of originals. James and Nick holed-up in their respective homes and began writing and sharing their songs with one another and the rest of the band. They also happened to send some demos to WFMU DJ, former MTV producer and notorious Deadhead Scott McDowell to see if he might be interested in releasing them once they were recorded with full band.

Scott started a new label, Kith & Kin, and took on the role of executive producer and manager, with the goal of helping to develop the audience that their music, rich in American rock heritage as it is, deserves. An album session was set up back at Sound Of Music studios in Richmond, VA for August 2017. As excitement for the session built, James suggested adding a pianist and it was at this point that D. Charles Speer & The Helix/Endless Boogie veteran Hans Chew was brought into the mix.

The band’s debut album was recorded in five days straight with two days’ rehearsal prior. It’s an equal split between Nick songs and James songs and, whilst the two are clearly very different writers, there’s a connectivity of vibe that has coalesced One Eleven Heavy into a smoking, celebratory whole. And you can hear their Cosmic American influences coming through loud and clear. You could even say that there’s a near arrogance about the abandonment of a progressive agenda in One Eleven Heavy’s music.

‘Well, to be honest, for me, it’s prog-regressive,’ says Nick of the contemporary drive toward surging ever forward. ‘Much contemporary rock music uses newly invented sounds and recording techniques to create what is, ultimately, on the whole, less aurally fulfilling than that which has come before it. And I think a lot of it is determined by the technology industry – so-called progress means more money for the technocrats, but less fun for the listener.

‘One Eleven Heavy is purely about creating an uplifting experience – for us as musicians and for anyone who hears it and feels an innate connection to it. It’s about letting go of ideas about what’s hip or what you’re supposed to like and just finding that little pocket of soulfulness within yourself that allows you to enjoy something that’s shamelessly feel-good.’

Music From Big Pink or Workingman’s Dead being deconstructed by Royal Trux.’ MOJO

‘Sounding somewhat like The Band and Crazy Horse with a smattering of roots-era Dead, One Eleven Heavy is centred around a veritable roster of players… It’s organic, joyous, upbeat and natural.’ Shindig!

‘An unabashed, triumphantly affectionate recreation of what Gram Parsons called Cosmic American Music – the country, folk and blues-informed psychedelic rock of the late 1960s and early 70s.’ The Wire

‘It swings on a revolving door of goofball riffs, spun up and spun around all dizzy from an elastic rock and roll boogie.’ NPR

‘Taps into a collective consciousness of what was actually “classic” about rock, without being dictated by what was pressed, sold or spun through the static crackle of radio. This echoes the ’72-’74-era Grateful Dead as it was lived in the room, and not as it was felt from the runout.’ Raven Sings The Blues

‘On its debut album, Everything’s Better, rock & roll combo One Eleven Heavy weave together various threads of choogling psychedelia —some Dead here, some Neil Young there, more than a little NRBQ and Little Feat — into a thoroughly joyful statement.’ Aquarium Drunkard

‘It shakes wilder than a stoned hippo… If this had happened in 1992, it would be out on Sony and advertised all over the world.’ Was Ist Das

‘Starts out sounding like the Doobie Brothers colliding head on with Little Feat and then dives off into the kind of jazz-flecked guitar, bass and percussive jam that the Hampton Grease Band once made all their own.’ Terrascope

‘Nothing here feels like genre exercise, and while the band may not — yet — have put in extensive time on the road, they sound like a group that has.’ Dusted Magazine